AMAZING WAY TO GET THE CHEETAH TEDDY IN DANCING LINE! 25 Dollidays Day 16

Getting Dressed: An American Girl Stopmotion

AGLOVE is an AGTube account run by Amber (and formerly her sisters Angel and Shiloh). They created their channel on June 30th, 2015, and have over 70 subscribers. Before Amber took full ownership of the account, the sisters began changing their content to include other video formats, such as gaming videos. As of July 9, 2021, all videos on the channel have been taken down for personal reasons.

Altogether, the sisters have 13 dolls, eight of which are 18 inch dolls. 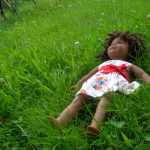