Behind The Scenes Channel

CameraCuties is an AGTube channel owned by Rebekah (and formerly her twin sister Kerri). They began posting on July 1, 2016, and have over 19,300 subscribers. She makes mainly AGSMs. 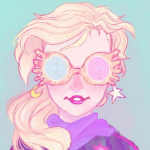